What is a bell tent?

The historical bell tent has developed into a sturdy and durable tent for many modern-day camping and glamping needs.

It was initially used for military shelter during temporary assignments, especially by the Europeans in the 9th century and by the British during the Crimean War of 1835.

In the United States, Henry Sibley, an American military officer, was inspired by the tipi bell tent of the Native Americans which led him to create and patent his own version of the bell tent called the Sibley bell tent.

The conical shaped tent was easy to set up and also created massive space as the exterior sloped outwards creating a perfect circle around a pole.

Compared to other tents, the bell tent required very little support and hardly a frame, since it’s held together by the tension between the center pole and the pegs around the circumference of the tent.

With time, bell tents, too, have evolved and become popular with civilians. They are still conical shaped and following the earlier British design, have side walls and guy ropes, which hold the tent together with even more strength.

The introduction of canvas bell tents has made the idea of living in a bell tent even more attractive. Whether you’re an experienced camper, an amateur, or a glamping resort owner, bell tents are the best tent option to go with regardless of your circumstances. 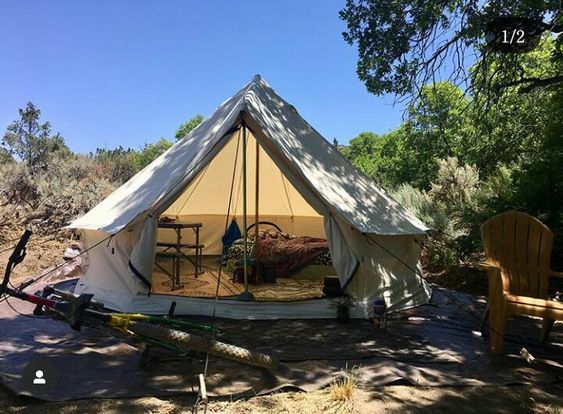 Both tents are treated with a breathable, PFC-free water repellant, mold and mildew resistant, and UV resistant finish.

When we manufacture our bell tents, we ensure that we go above and beyond with all the features and functionality to make your trip a memorable one. That means we include a stove jack, windows, bug mesh, flooring as a standard in all tents (except for the Mini Regatta, which doesn’t have a stove jack).

Both also have proprietary shock-absorbing guy lines to keep the tents in place in the case of heavy winds or rain.

That said, there are also some differences between the Avalon and Regatta tent which can serve different purposes in your outdoor experience. Read below so you can find out which one would work best for you. 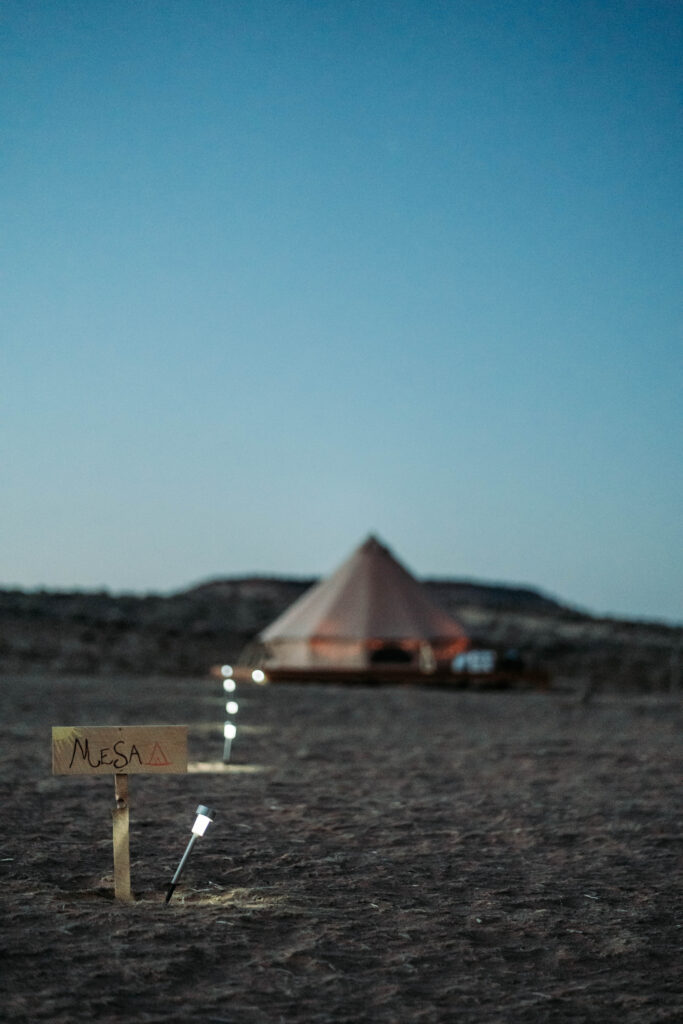 The Avalon bell tent is a premium canvas tent made of 10.10 oz. double-fill army duck canvas. Compared to the Regatta, it has higher walls (3′), ten windows all around the walls (12 windows on the 20′ Avalon), an A-frame door, and a heavier floor, making it ideal for bell tent glamping and use as a luxury bell tent.

The great thing about the Avalon is that the walls can also be rolled up, so you can create a canopy when it gets warmer and you want to enjoy the breeze while sitting in shade.

Generally considered a larger and more luxurious tent, it is definitely a complete package for any camp or glamp adventure. 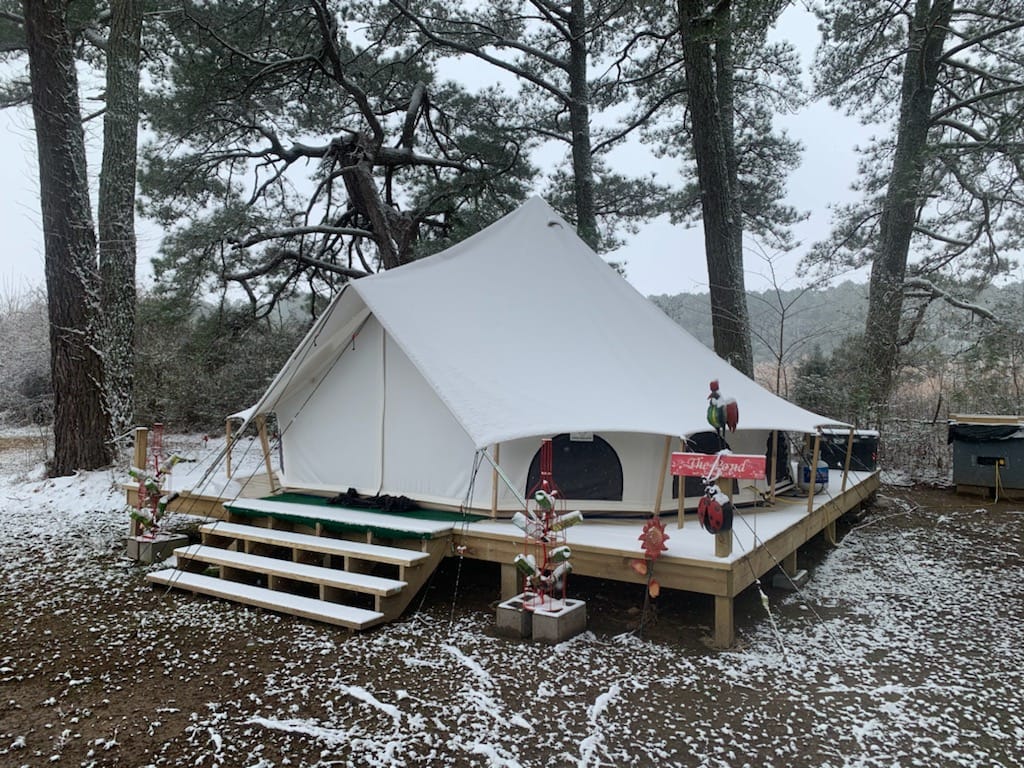 The Regatta bell tent is American’s favorite canvas tent, and it’s a functional, versatile, affordable tent that’s perfect for almost any use.

Made of 8.5 o.z. army duck canvas, the Regatta bell tent has a door pole in the center and is generally shorter in wall height (2.7’’), and ceiling height.

At White Duck Outdoors we offer the Regatta bell tent in sizes as small as 8’ which is perfect for a smaller camping experience. 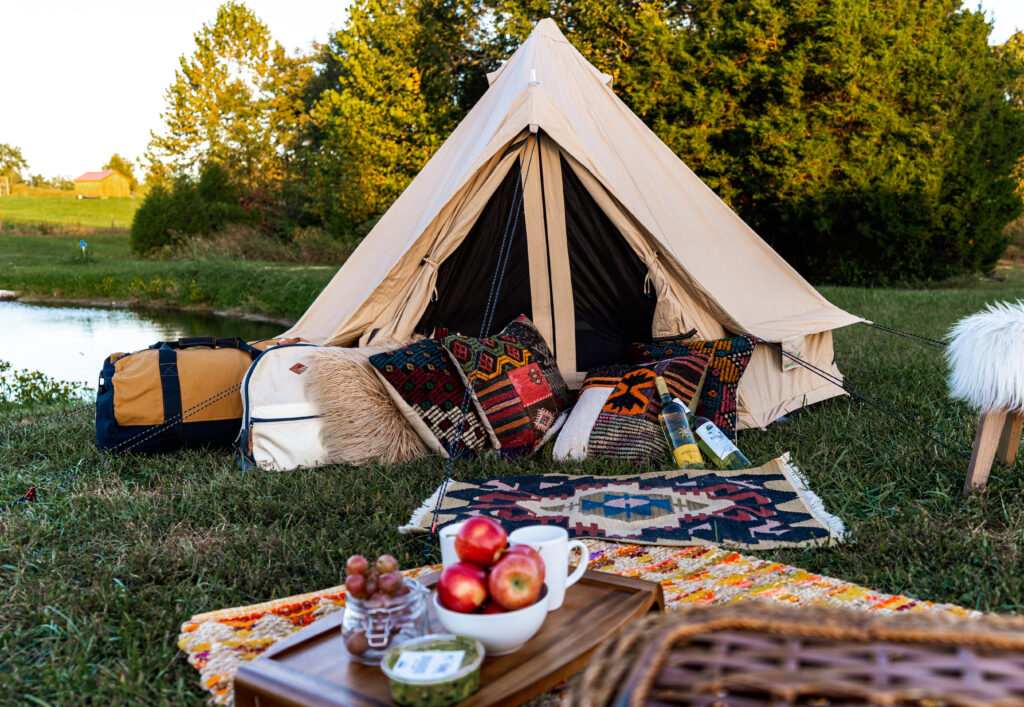 Mike is an avid outdoors person with on a goal to camp in every National Park in the US. When he's not spending days (and sometimes, weeks) in his canvas tent, you might find him playing the guitar or soccer on the weekends.