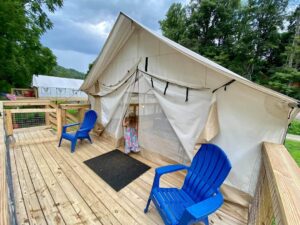 Rusty’s Roost River Camp is a unique glamping tent site in Western North Carolina, Green Mountain, right on the North Toe River. When first starting the glamping business, Rusty spent months researching which tents would be best until he settled on White Duck.

“I remembered it almost instantly after I listed it on Airbnb. It was actually a weeknight and we were brand new and so nervous. They loved it. It seems like the floodgates opened right after that!”

Ever since, Rusty has been doing business with White Duck. Today, the Roost is a highly rated campsite that people can’t stop buzzing about. “From May 22nd to December 31st, I booked 166 out of 168-weekend slots.” 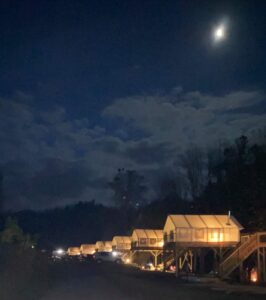 Rusty, founder of the Roost, has been working overseas since 2016. He’s been building U.S. Government projects such as U.S. Embassies and Military Compounds. Before he began constructing, he was in the U.S. Navy for 4 years, during which he gained a passion for traveling the world.

Rusty has always loved camping and the outdoors, and his initial plan had been to build bedroom cabins on the river to rent out. This idea evolved into the glamping project that is now Rusty’s Roost River Camp.

“Growing up, my family would camp near Mount Mitchell, the highest mountain on the east coast. [I wanted to make the camp] at the riverfront property to enjoy with friends and family. Make memories, put down their tablets and cellphones and just enjoy what kids enjoyed before technology.”

Rusty’s Roost stands out for its unique setup, location, ideation, and services.

Right now, our first location has six glamping tents set up on elevated platform decks. The decks are outfitted with different types of sleeping and bed arrangements. We have a couple charcoal grilling stations set up as well as fire pits with swivel grill grates for over the fire cooking. People are absolutely loving it so far!” 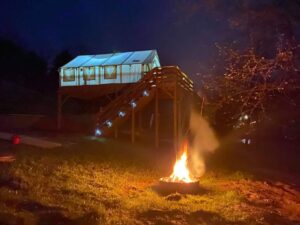 Before choosing White Duck’s Alpha Wall Tent for Rusty’s Roost, Rusty had done a considerable amount of research into choosing the perfect tent.

“I did a lot of research when I first started looking for canvas wall tents. I spent months talking to reps, looking at videos, reading reviews and trying to figure out what would be best for our setup.”He decided on White Duck’s Alpha Wall Tent for its rectangular shape and spacious interior, which allows for Rusty Rosst’s bedroom setups and for their guests to spread out comfortably.

“The Wall tent is ideal because of the rectangle shape which helps with building the platform with common measurements. It only made sense. We ordered the 16×20 tents, so 320sqft of space is plenty for our bedroom setups and for our guests to spread out and be comfortable.”

Rusty’s Roost is typically fully booked out immediately. In the case of a cancelation, when the Roost posts the opening on their social media, it is usually booked within the hour. Rusty has created an interesting structure for White Duck’s tents. To keep the wall tents safe in the event of flooding, the tents are built above the base flood elevation. This gives guests amazing views of the river and a dry gravel area underneath to relax and eat.

“I think the platforms being in the air really draws people in. It’s unique. They wouldn’t be as popular if they were built on the ground.”Recently, Rusty’s Roost has expanded to accommodate the growing number of bookings. He’s chosen a more remote, slightly quieter location on the Cane River surrounded by mountains and undeveloped land.

“Each week I was turning people away because we were full. It was time to expand. I came across a beautiful piece of land for sale about 3 miles down the river. It was perfect! The only problem was, someone had it under contract. I waited and waited, finally, something fell through with the buyers and the agent called me. ‘I’ll take it!’”

Rusty aims to build 10 White Duck tents at the new campground and to install larger bathhouses to accommodate a potentially larger crowd. 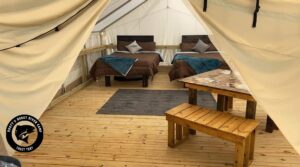 For Rusty, another thing that really stood out about White Duck was its service. He’s continued to do business with White Duck, and enjoys a close relationship with the company.

“I’ve done a good bit of business with White Duck now and I don’t know how many times I’ve personally talked to Kumbar on his personal phone, but from sales to Merry Christmas’s, to congratulate me on my first child, we have developed a relationship that I didn’t see possible with any other company. I’ve never seen that type of customer service outside of what WE offer at Rusty’s Roost!” He mentioned that White Duck is swift and meticulous in responding to even the smallest issues, such as shipping or missing tent parts. “At this time I am considering franchising what I am doing and White Duck Outdoors is the only tent company I would count on as a partner.”