Camping in the outdoors soothes the soul. It gives you the freedom to enjoy nature’s bounty on your terms. Whether you’re exploring all day, kicking back, or avoiding an impending storm, you’ll eventually find yourself with a bit of downtime.

The best way to spend that time is by playing a friendly competitive game with your loved ones. Some camping games highlight athleticism, while others emphasize problem-solving. They’re all great tools for bonding and getting to know your camping party.

These camping games will keep everyone entertained without using up any screen time.

The Best Camping Games for Adults

Two Truths and a Lie

Two Truths and a Lie is a classic game that promotes bonding and openness. It’s a great way to learn about your fellow campers. This conversational game takes up almost no room, making it a great game to play around the campfire or in your sleeping bag before bed. To up the ante, you can opt for a more engaging game like Truth or Dare.

How to play Two Truths and a Lie 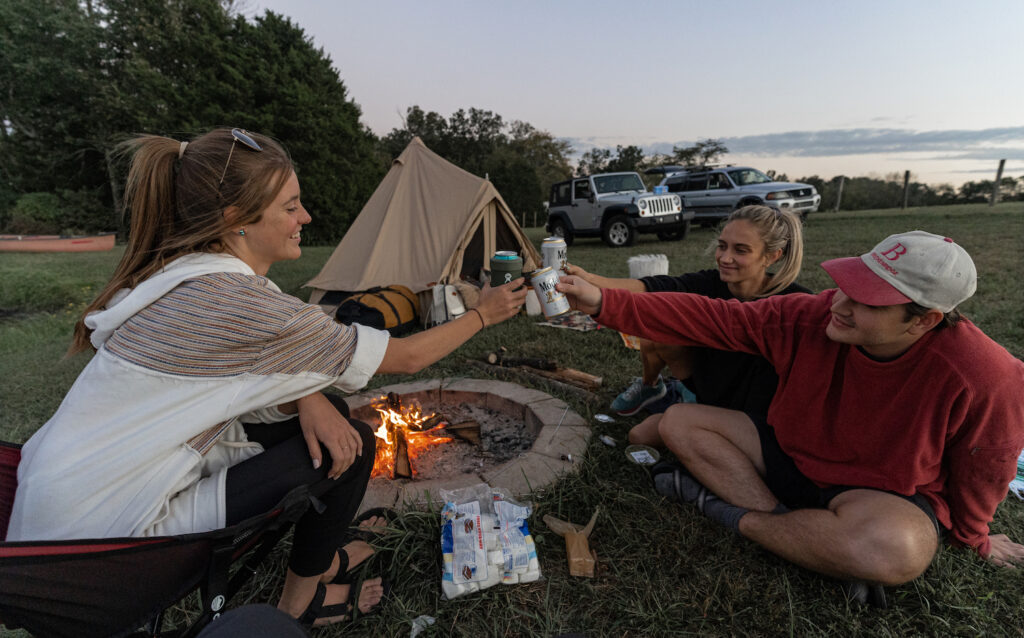 Night Frisbee (also known as glow-in-the-dark-frisbee) is a fun twist on a classic sport. It’s like regular frisbee, but you play at night amongst the shadows. You can play within the confines of your campsite or take it into the woods. Trees and other natural features add a welcome challenge to the playing field. Players wear glow sticks or headlamps to see in the dark. For added fun, you can also get an LED frisbee or glow-in-the-dark frisbee disc. To up the ante, you can play ultimate frisbee or disc golf under the same conditions.

How to play Night Frisbee 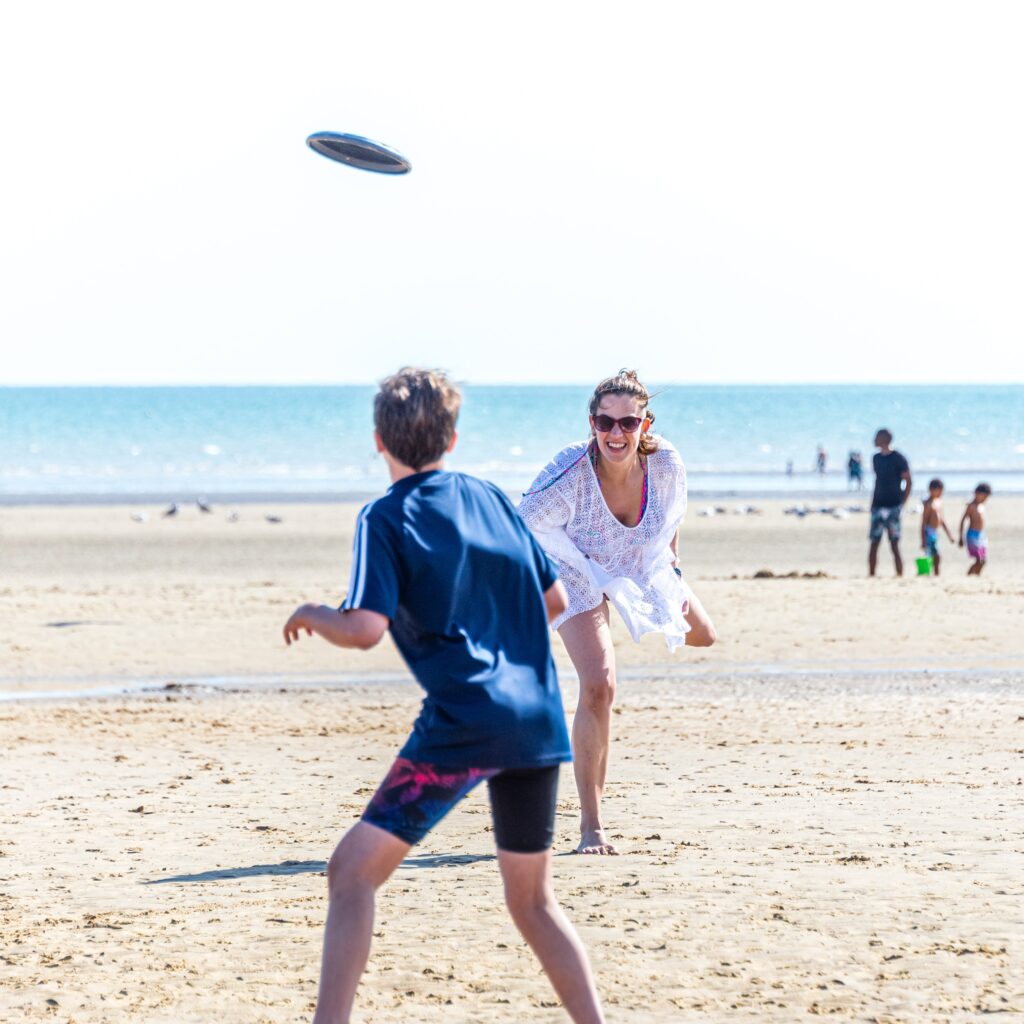 You can turn almost any camping game into a camping drinking game by including a wager. Board games, parlor games, card games, conversational games, and lawn games can all be made into drinking games with a few creative twists. The player who loses has to drink, the player who wins has to drink, or everyone drinks at a designated time. So pour those camping drinks and have a blast!

The Best Camping Games for Kids

Bingo is a simple game where players mark images on a specialized card. You can play it anywhere with a flat surface—in your tent or RV, at the picnic table, or around the campfire. It’s perfect for any age group and is a great way to keep all the kiddos in one place. You can make it more educational by teaching the kids about each object as you call them out.

How to play Bingo

A scavenger hunt (also known as a treasure hunt) is one of the best ways to keep kids engaged and learning about the outdoors. It’s a flexible game where you can set your own parameters and time limits and choose the complexity of clues. It’s even better when kids from neighboring campsites join in the fun. You can expand the parameters to the entire campground and surrounding natural features.

How to play Scavenger Hunt 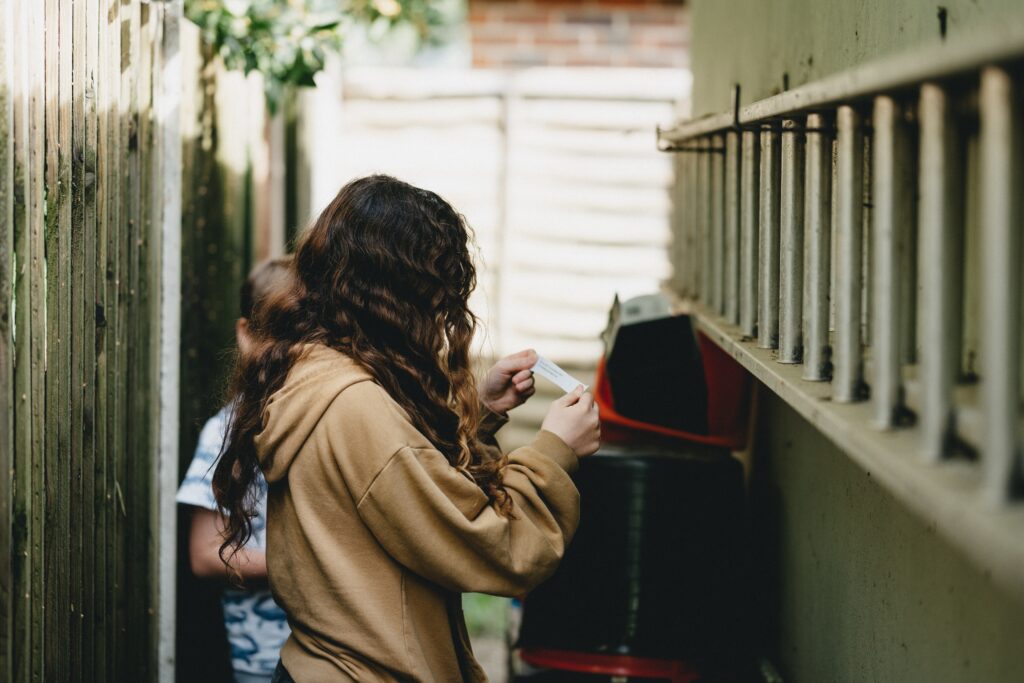 Board games are the perfect way to pass an afternoon in the tent or RV. Just throw up a tarp and prepare for some rainy fun. They’re a fun way to teach your kids friendly competition strategies while strengthening their reasoning skills. Popular camping and outdoor-themed board games include National Parks Yahtzee, Starlink, and Parks. But you can’t go wrong with classics like Bananagrams, Candyland, Monopoly, or Connect 4. Board games pair well with delicious camping snacks and fruit juice. A little friendly competition amongst friends (and family) is great for the soul.

The Best Camping Games for the Whole Family

Charades is a classic parlor game of acting and guessing. It’s guaranteed to bring laughter and joy to everyone in the family. Players can decide how difficult to make their clues, depending on the age range of everyone involved. You can make it even more special by acting out camping-themed words and phrases. It’s most fun around a campfire but can also be played inside a roomy cabin tent while it’s raining.

Equipment: Paper, a pen or pencil, a small container

How to play Charades 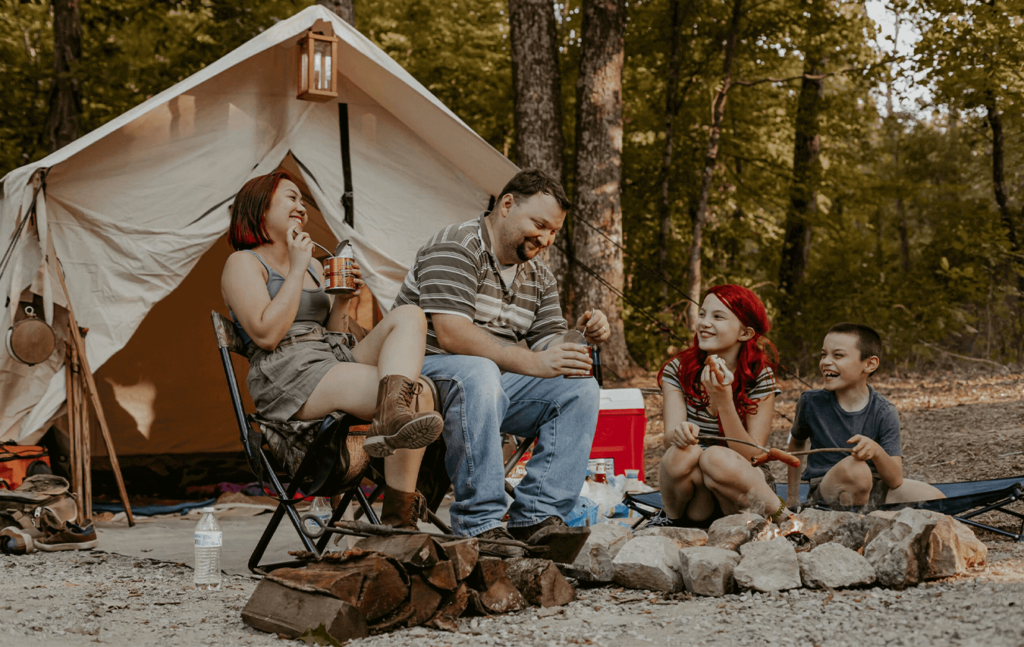 Cornhole (otherwise known as Bean Bag Toss) is a classic lawn game that’s easy to learn and fun for the whole family. It doesn’t require much space, making it an excellent option for smaller campsites. Cornhole is an exciting game for adults and kids alike as they show off their tossing skills and encourage each other. You can bring a cornhole set or make a family project of building your own DIY boards.

How to play Cornhole

You can’t go wrong with card games. They usually only require a deck of cards, making them great options for days inside the tent or confined to the campsite. There’s a card game for everyone in your family, regardless of age. Adults enjoy games like Cards Against Humanity or Exploding Kittens, while kids prefer games like Go Fish and Uno. With a simple deck of house cards, you increase your options exponentially. Grab a card deck and a book of card games, and go nuts.

Giving up an academic career, Nicole has put her 30 years of outdoor experience to good use as an accomplished content specialist, educator, and photographer. She guides trips and leads workshops all over the western United States, dispensing knowledge to adventurers of all ages. Nicole regularly works with respected outdoor brands, harnessing the power of words to inform readers, and she’s a vital resource for education and diversity initiatives, using her expertise to help organizations implement meaningful change. Learn more by visiting nicolematkins.com.